The Singers were established in 1974 at a public meeting called to test the interest in forming a local choir. There was an extremely good response from the residents of Dalkeith and from those living in the surrounding areas. At the meeting a choir was formed. The then Musical Director at George Heriot’s School in Edinburgh was appointed conductor for the first year during which time the choir ran as an evening class encouraging those who “just wanted to sing” to attempt all kinds of music including classical and sacred. Roger Wastie was then asked to be conductor; the choir ceased to be run as an evening class and became a community choir and the Dalkeith Singers as we know them today was formed. 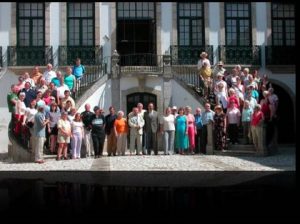 For a few years the choir was a member of the National Association of Choirs and we joined forces with others to sing in the Usher Hall in Edinburgh and in various churches in and around Dalkeith. A move to Newport-on-Tay prevented Roger from conducting us any more.

Our next conductor was Jeff Aldridge, who had assisted Roger, and contributed to the choir repertoire with his own compositions. Jeff continued to sing in the bass section for many years until his passing, and we continue to perform his works from time to time. Morag Sherriffs, who took over from Jeff, retired at the end of the Spring term in 2007, after seven years which saw the choir almost double in membership. Morag also led the choir in our first visits abroad to both Jarnac in France, the twin town of Dalkeith, and Amarante in Northern Portugal.