The current Musical Director is Jessica Leary. Jessica combines a successful career as a professional soprano, teacher, and choral conductor. She holds a Master of Music (Opera) with Distinction from the Royal Conservatoire of Scotland, and a Bachelor of Music with First Class Honours from Edinburgh University.  Passionate about music outreach and education, Jessica has worked with the National Youth Choir of Scotland and Scottish Opera Education, in addition to holding posts as a visiting teacher at St Andrews University and St Mary’s Music School (Edinburgh), and being an examiner for the Associated Board of the Royal Schools of Music.

As a professional soprano, she has performed across the UK and in Europe with companies including the Royal Scottish National Orchestra, BBC Scottish Symphony Orchestra, Scottish Opera, Aldeburgh Music, the Dunedin Consort, and the Bayreuth Festival Chorus. A Samling Artist and Britten-Pears Young Artist, she has featured on a number of recordings for Warner Classics and Delphian Records, and on BBC Radio Scotland and BBC Radio 3.

For the first year of its existence, the choir ran as an evening class led by the then Musical Director at George Heriot’s School in Edinburgh.

Roger Wastie was then asked to be conductor. The choir ceased to be run as an evening class and became a community choir and the Dalkeith Singers as we know them today was formed. Roger held the post until a move to Dundee made it impossible for him to continue.

Jeff Aldridge, who had assisted Roger, and contributed to the choir repertoire with his own compositions then took over.

Morag Sherriffs was appointed in 2000 and retired at the end of the Spring term in 2007, after seven years which saw the choir almost double in membership. Morag also led the choir in our first visits abroad to both Jarnac in France, the twin town of Dalkeith, and Amarante in Northern Portugal.

Duncan Ferguson  became our next conductor when Morag Sherrifs retired in 2007.  Duncan was then the Assistant Organist at St Mary’s Episcopal Cathedral, Edinburgh and Organist at Fettes College. The following year he was appointed Master of Music at St. Mary’s. He retired from leading the Dalkeith Singers in May 2010.

Norman Adam then took over the reins of the Dalkeith Singers until 2014.   After an initial period in the first ever Scottish Opera chorus Norman was involved in teaching music and in opera and choral performance for many years both as a singer and conductor. He retired in 2005 from his post as Head of the Music Department at Liberton High School where he had latterly developed a number of internet techniques for helping young people understand music listening and the history of music which are still frequently used resources for both teaching and revision for national music exams throughout the UK. A former member of the Scottish Philharmonic Singers and then the Scottish Chamber Orchestra Chorus he left there to become conductor of the Kevock Choir from 1995 – 2000. 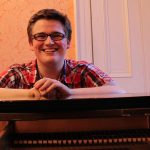 Cole Bendall was appointed as Musical Director of the Dalkeith Singers in April 2014. Under Cole’s directorship, the choir performed in collaboration with the Boeing Employees Choir and achieved several sell-out concerts, including a memorable Mozart Requiem concert accompanied by organist and soloists. Cole also championed the inclusion of new works in the choir’s repertoire, including works by young composers.

A graduate of Universities of Aberdeen and Edinburgh, while Musical Director with the Dalkeith Singers, he was also studying conducting with Gregory Batsleer, undertaking a Ph.D. in Music at the University of Edinburgh as well as conducting the University of St Andrews Renaissance Singers and the Reid Consort.

A tenor singer and pianist by upbringing, towards the end of Cole’s time with the Dalkeith Singers, he became Tenor Lay Clerk at St Mary’s Episcopal Cathedral, Edinburgh (working alongside another of the choir’s former Musical Directors, Duncan Ferguson). Cole left the Dalkeith Singers in December 2016 after being offered a tutoring position at the University of Edinburgh. Visit www.colebendall.com to read about his current activities.